Next weekend the San Diego Python Users Group (we) will be hosting an Introduction to Django workshop. This post is going to try to document the planning process for having a workshop like this one in your area.

One thing that cannot be stressed enough is getting a sponsor. Brightscope is sponsoring this Intro to Django workshop. Our Intro to Python workshop was sponsored by the PSF and that worked extremely well. This doesn’t seem important on the surface but without planned meals it is tough to get people to stay in a room together for seven hours. Otherwise people would be constantly leaving to get drinks or coffee and the workshop wouldn’t flow as well. Free food is also a pretty good motivator and it gets people to show up.

We sent out a little survey last week to find out about people’s skill levels and what they already know about Python, HTML, and Javascript — pretty much the prerequisites of Django. Just about everybody knows HTML and some Javascript but that’s where things diverge. We have a pretty good mix of operating systems and the Python experience runs the full gamut. However, this step is key to planning out the presentation and schedule. We are having a brief newbie session on the Friday before the workshop for people to install Python and get their development environments setup. You can’t start from Django tutorial #1 if you don’t have Python installed! The goal is to have everyone on the same page so that we can have a simple working web app by noonish on Saturday. The afternoon will be spent somewhat independently adding a feature or two to that app.

Preparing for the Intro to Python workshop earlier this month was easy since we liberally used the Boston Python group’s workshop materials. However, for this one we did not have as much to go off of. We are leaning heavily on the Django tutorials, the Django book (to a lesser extent) and Chander Ganesan’s PyCon talk from this year. At Djangocon this year, Russell Keith-Magee mentioned that the DSF was going to put together some training/workshop materials for just this sort of thing, but it is not ready yet. Hopefully what we create is useful and can bootstrap that process. Our materials are very early stage right now, but feel free to make suggestions or fork them for your own purposes.

This post is over 5 years old. Django now uses PBKDF2 by default and has pluggable password hashing. See how Django stores passwords for detail.

Revision 16453 of Django improved the security of the password algorithm for the first time since the 0.90 days of years ago. This is a brief discussion on that and Django password schemes in general.

Most people know that “good” passwords are at least 8 characters and contain an uppercase, lowercase, and number at least. Let’s ignore special characters for now. This yields about 47 bits of entropy. The entire set of 8 character passwords could be reversed in about 36 hours assuming ~1B hashes per second. You could just burn your new rainbow table to a DVD and break everyone’s password. Easy as pie.

Unfortunately for password crackers, this hasn’t worked for years because of salted passwords. Django uses a system of salted passwords where when a user types in their password, the user’s random salt gets prepended to the password before being compared with the salted and hashed password which is stored in the database. It works like this:

Each user gets a different random salt and this way a leaked password database cannot be easily reversed using a rainbow table. Django switched from using a 5 character salt composed of [a-f0-9] (20 bits of entropy) to a 12 character salt made up of [a-zA-Z0-9] (over 71 bits). Formerly, the salt was simply made of the first 5 characters of a sha1 hash of a call to random.random() for about a million unique possible salts. Breaking an old password database was about a million times harder than unsalted passwords which made it prohibitive but not impossible. The new system is considerably more complex.

If your database leaked, salted passwords will protect the entire set of hashes from being reversed. However, it will not protect a specific hash from being reversed since the salt is stored in the clear. You do not need to reverse every hash to do some damage. You can just reverse the administrator user’s password. If you look what gets stored in Django’s User table, it looks like this:

The password field stores the method of hashing (sha1), the salt and the hashed password separated by ‘$’. Given the user’s salt, we could easily check all 8 character passwords for that salt in the same 36 hours. This doesn’t change if the salt is 5 or 12 characters. Because sha1 is designed to be “fast” since it is also used for things like checksums, it doesn’t really offer much protection here. A better solution is to use a “slow” hashing algorithm that is designed specifically for password hashing like bcrypt or PBKDF2.

There have been numerous tickets (#5787, #5600, #15367) and proposals and even a project that duckpunches Django to add bcrypt. Parts of these proposals — namely using a system source of randomness where available and a longer salt — have already been implemented as part of changeset 16453. A long term solution is to make the encryption pluggable similar to the way database backends are pluggable. This makes it easy to swap out a particular encryption algorithm if weaknesses are discovered and let different installations have different algorithms based on different requirements.

A brief security overview I collaborated on made it into the Django trunk! Let me know if you think I’m missing something.

If I somehow manage to get diligent, this might be just a precursor for a talk at Djangocon.

For some time, there was one re-usable Django tagging application — django-tagging — and that was it. If you didn’t like it, you rolled your own. It was certainly a decent application. You could pretty easily tag anything and provided some decent features out of the box. However, very recently, another app showed up: django-taggit. This post is going to compare and contrast the two and why I decided to switch my work project to django-taggit.

Back in March when we were just starting out, I went with django-tagging because that was the only tagging app around. Back then I didn’t think about it, but now 6 months later there have been no new updates or releases to django-tagging. I think this really led to the creation of django-taggit. Django-tagging had some nice features that were pretty useful like a template tag for a tag cloud. While django-tagging got me up and running quickly, it wasn’t without its annoyances. Deleting an object left dangling references to its tags since those would not be deleted because it used generic foreign keys. There was an issue filed for this back in 2008 that was never resolved. It resulted in me having to override the delete method of every object that got tagged. If I had 3 objects that got tagged, I repeated the same snippet 3 times!

The fact that such seemingly important functionality had not been added since 2008 pointed to the fact that django-tagging had been left fallow for a while.

At Djangocon, I first heard about django-taggit. Immediately, I liked the fact that the docs were a little bit more fleshed out than django-tagging’s docs. In addition, I found the search API for taggit to be much more intuitive.

The nicest part about django-taggit is that it integrates much better with the admin. To tag an object in the admin with django-tagging, I would need to figure out the primary key id of the object I want to tag and then go to the TaggedItem admin and then tag it by id. It was unintuitive and error prone. With django-taggit, it’s as easy as editing an object the normal way. A “tags” field shows up and it explains that it simply accepts a comma separated list.

The one feature I liked from django-tagging that taggit doesn’t implement is the tag cloud. I can understand that different folks want clouds done slightly differently and that it’s not a feature that has one right way to do it. However, it was pretty damn convenient.

All told, django-taggit seems to do the job that I want it to do and it stays out of the way otherwise. It’s much more intuitive to setup and use. It’s actively maintained and the docs are better. There’s nothing not to like. At the same time, I don’t want to say it’s the end all. I’d love to see the django-tagging guys come back with some great new features because apps can always be better.

Yesterday, the Django team released a security update. The post basically says it all. If you are on Django 1.2.1, UPDATE NOW! 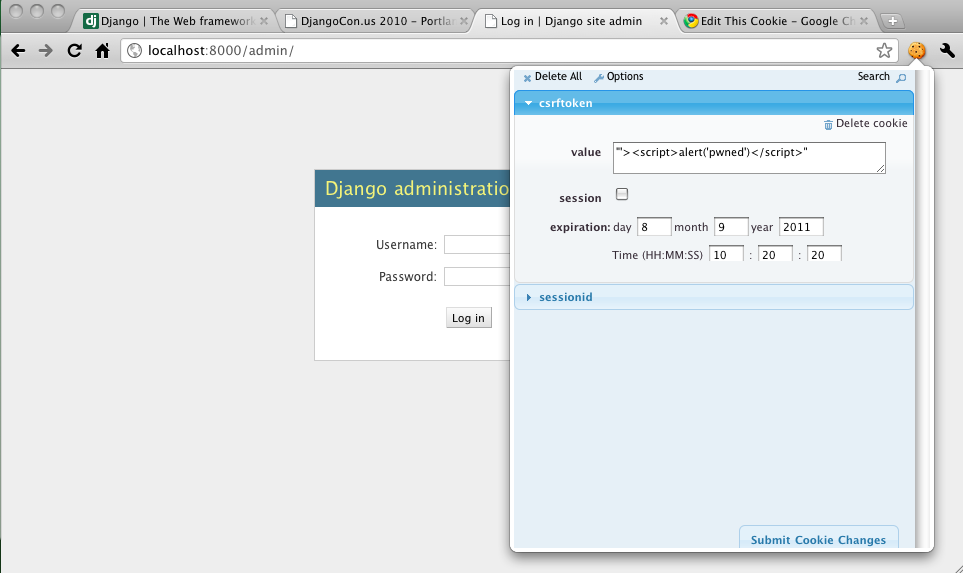 The issue is a standard non-persistent cross site scripting (XSS) exploit. Django explicitly trusted the cross site request forgery token which is supposed to be a hexdigest based on your SECRET_KEY in settings.py. However, cookies are simply stored on the client filesystem and they should generally be considered untrusted user input.

First, setup a simple Django project that has the admin enabled. Visit your simple website and you’ll be issued a CSRF token that is saved in your cookie. Simply edit the token (with Edit this Cookie for Chrome maybe) and enter a script tag and save it. Reload the page and the script tag you entered will get echoed back unescaped and executed. 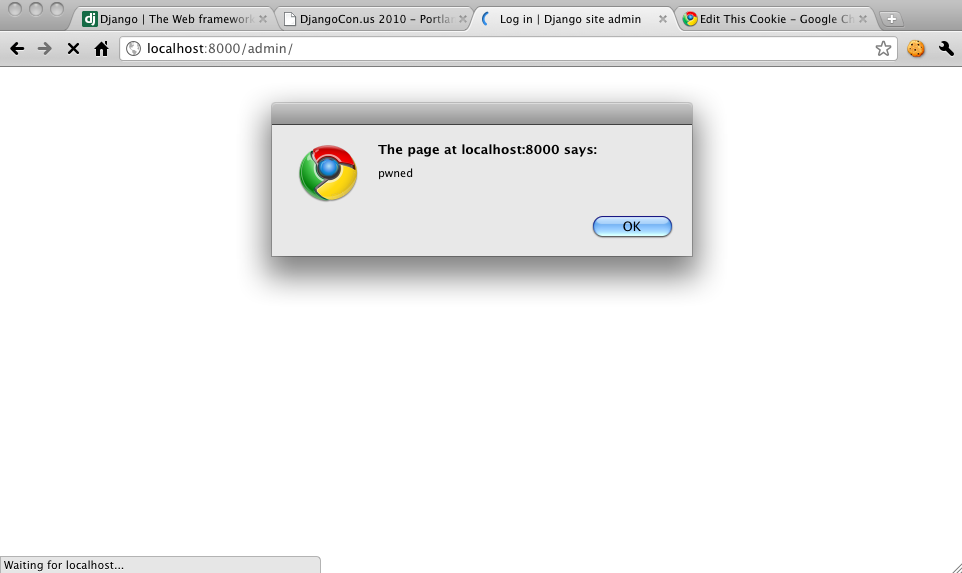 Edit: I should note that this vulnerability affects any form that uses a CSRF token, not just the admin.